2004 was a tough election for justice-loving Oregonians. Despite an intense voter education and mobilization campaign, ROP members and human dignity leaders witnessed the reelection of President Bush. They mourned the passage of Measure 36 – a statewide ballot measure that amended the Oregon constitution to define marriages as a union between one woman and one man. ROP staff are tired – and outraged. They sensed the need for bold action to re-energize and reignite the spirited passion of Oregon’s rural and small town human dignity activists. The idea for a week-long Walk for Truth, Justice and Community is born. 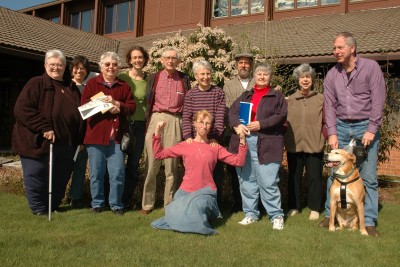 To reflect on the political moment and plan for the Walk, ROP staff invite national movement leader and long-time ROP supporter Suzanne Pharr out to Oregon for a week-long “rolling think tank” tour. Some 75 community leaders from 16 communities meet in living rooms across the state.

Conversations with Suzanne remind human dignity leaders that, despite the institutionalization of the Right in the government, many people are thinking more critically about politics than they have in a long time. Now is the moment to create the beloved communities our movements need – inclusive places where radical transformations can take place, where people are seen not as passive objects, but as fully human, active agents of change. 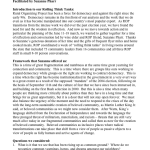 What is it that we see that has been rising up as common ground? Where do we recognize common yearnings, hopes, and dreams amongst our neighbors? How do we use this march and this opportune time to both engage our existing groups and expand our base? 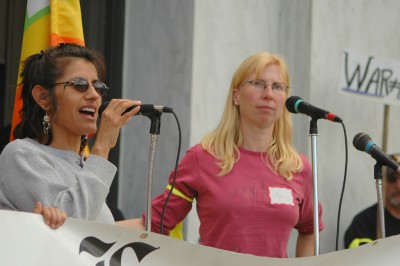 The March kicks off on Sunday, June 12th, 2005 with a rally at the Oregon State Capitol in Salem. Rural caravans from around the state gather to assess the threat level in their communities at an “Assembly of Underrepresented People to Declare Our State of Emergency Created by the War in Iraq.” Staff report:

Our first day together has indeed been a big and bold one! Under sunny skies, nearly 1000 folks converged on the capitol bearing their colorful flags and homemade banners and even brighter spirits of celebration and resistance. Speakers Ramon Ramirez, Kathleen Sadaat, and Cecil Prescod testified to how this war in Iraq is also a war at home for working people, for rural folks, for immigrants, and for all of Oregon. Cecil put into words the vision of beloved community that so many of us are yearning for. And Aztec Dancers and Enemy Combatants performed and delighted and inspired.

“It’s an exciting day, shared Connie Stringer from Deschutes County, and something that I’ve looked forward to for months. I just met this woman here from Douglas County and it is nice to be with someone you can really talk about the state of the world and what we need to change to make it better. It is going to be a great week!”

Over the next five days, human dignity leaders from across the state, walk nearly 50 miles, from Salem to Portland, to communicate deep outrage and outrageous courage. They are joined by immigrant and worker allies from PCUN (Pineros y Campesinos Unidos del Noroeste), Oregon’s farmworker union. Along the way, Walkers stop for daily actions raising up key themes in the interconnected struggles for peace, civil liberties and civil rights, economic justice and immigrant rights. Each evening, the Walkers gather in a Tent City to share stories, feast, celebrate, and build their resistance movement.

Sending a Message from Rural Oregon

With daily actions, press releases and media plans, Walkers seek to influence public opinion and public policy along their route.

On Monday, June 13th, constituents from all 60 Oregon house districts meet with Oregon legislators demanding funding for Oregon’s needs, the protection of civil liberties and civil rights for all, and support for economic and immigrant justice. That same day, some 150 Walkers march on the Governor’s office with hundreds of postcards from around the state demanding the return of the Oregon National Guard and an accounting of the cost of the War in Iraq: 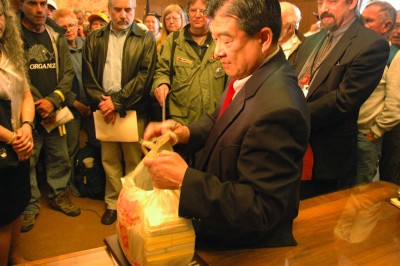 Today we delivered a BIG message from rural Oregon to Governor Kulongoski – Bring the Oregon Guard Home Now! The hundreds of postcards that were collected in the weeks leading up to today were delivered along with moving and challenging words from Oregon families involved with Military Families Speak Out. We filled the room, and vets from the Walk stepped forward to support the call. If you are reading this from home, call the Governor’s office now at 503.378.4582 to let him know that you are a part of the movement in Oregon calling on him to bring the Oregon National Guard home to serve Oregon’s needs not the war.

On Thursday, the Governor “makes his most impassioned speech” to date (according to Oregon Public Broadcasting) about the role of the Guard and calls for a national debate about the draft. “Is it just a coincidence?,” Walkers wonder.

Walkers continue their advocacy with a Rural Speak Out against Social Security Privatization in Canby and a final rally in Portland at the World Trade Center: 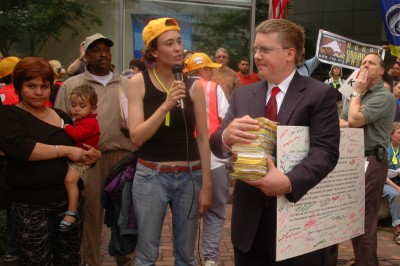 ROP Staff Organizer, Cara Shufelt, delivers hundreds of postcards calling for an end to the war in Iraq to Senator Smith’s representative.

Walkers for Truth met up with Portland supporters in Westmoreland Park on Friday for a boisterous march through SE Portland and downtown to Senator Gordon Smith’s office at the World Trade Center. There the marchers met hundreds of supporters for the final rally of the Walk for Truth, Justice, and Community (the crowd estimate was over 400 people).

At the rally, the ROP’s Cara Shufelt delivered hundreds of signed postcards to Senator Smith’s representative Rian Windsheimer, urging the Senator to back a withdrawal of US troops from Iraq, an end to prisoner torture, and redirection of funds for human needs, not global war. Cara led the cheering crowd in reading the cards’ message out loud to a game Windsheimer, who politely thanked people for walking so far to deliver the message.

The postcards, rallies, press conferences are important. But, at the end of the day (or Walk, in this case) it’s hard to point to a concrete change in law or policy that came about as a result of the Walk. The true impact of the Walk is in the relationships built, the deepened analysis.

Months of coordination and highly detailed planning by ROP staff and volunteers lay the groundwork for a transformative experience for Walk participants. Logistical challenges (how fast should we walk? how do we keep everyone on the pavement? how will we communicate when we don’t speak the same language?) become opportunities to develop cross-cultural solidarity. In conversations along country roads, participants deepen their understanding of one another and the common concerns that unite them. Dots between issues are connected. Beloved Community is in the making.

The 2005 Walk for Truth, Justice and Community was neither the first nor the last time that rural Oregonians took to the streets in a coordinated, cross-county walk for justice. At strategic moments in the movements for LGBTQ liberation, immigrant rights, and farmworker justice (and following in the footsteps of grassroots movements from across the country and throughout the centuries) rural Oregon’s human dignity leaders have led or participated in multi-day “walks”:

“Walks” – in which participants not only march, but also eat, sleep, sing, and strategize together over a period of days – are unique opportunities for deep and transformative cross-movement, cross-community relationship building and solidarity. The “Walk” is a flexible tactic that can be strategically deployed to escalate a campaign, build allies and engage partners, raise awareness, generate media attention, and mobilize and engage supporters across a broad geographic area in a shared, collective action.