Ever since ROP was founded in the early ‘90s, our approach to organizing has been to lead with core values: Human Dignity. Democracy. Social Justice. ROP articulates our mission in terms of advancing these values in rural and small town Oregon—not in terms of work on any one issue. This doesn’t mean that ROP doesn’t work on “issues.” But the issues fluctuate with the times, while the values remain consistent. The core of ROP’s work is to build a strong base of people who are committed to organizing around these shared values in their own communities. 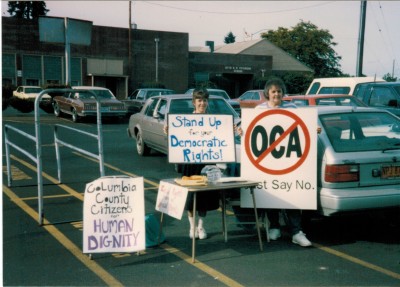 ROP organizers have known intuitively what cognitive scientists have proven empirically: values are a primary driver of behavior and motivate people to act.

Amid the acrimony and rhetoric of the ‘90s culture wars, ROP’s early leaders found that the values of human dignity and democracy resonated with a broad range of people in our rural and small town communities. In 1992, we started meeting with rural Oregonians concerned about the anti-gay Ballot Measure #9 – but we understood that it wasn’t just one group’s rights up for a vote that was the problem. We were up against more than a single bad policy. We believed we were in a struggle for the soul of rural Oregon, and in order to elevate the fight to the level of resistance and significance it deserved we needed people to harken to their deeper morality, to basic human values that good people across the political spectrum held dear.

Framing our goals in terms of “upholding human dignity” and “creating an inclusive democracy”, allowed our growing network of rural “Human Dignity Groups” to transition, after the election, to work on other issues such as farmworkers’ rights, tax reform, and reproductive justice. For ROP, working to uphold human dignity meant working on these issues, too. For most of rural Oregon, having a separate advocacy group for each progressive issue simply wasn’t realistic or effective. There simply aren’t enough people to support that kind of duplicative infrastructure. Multi-issue organizing within a single group also had the added bonus of increasing understanding and deepening analysis of the links between issues that matter to progressive rural people.

While casting the net of our mission wide helped facilitate the multi-issue solidarity that we see as instrumental in building a strong social movement for the long haul, it hasn’t always been easy. Over the years, many groups and leaders were successful at expanding their perspectives, moving from LGBTQ rights to tax fairness to immigrant rights as the needs of our communities and the struggles of the day shifted, while others left the ROP network, convinced that a single-issue focus was the best path for them, or unable or unwilling to face the limits of their own biases or experiences. But today, some 50+ groups and 13,000 people strong, we believe there is real power in weaving a strong and interconnected web, tied together by our shared values. 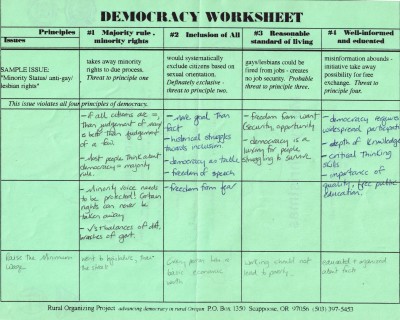 Of course “democracy” can mean many things to many people. It’s important to define what’s inside our values-based frames. It’s not enough just to toss the words around. As organizers we need to be very clear ourselves about what we mean by “democracy” or “human dignity” and able to articulate to our members, potential members, and hopefully even those who disagree with us how these frames create alternative ways to view issues they care about. Otherwise we run the risk of common ground devolving into the least common denominator.

Leading from our values should lead to deep and meaningful conversation that cuts through the jargon, and to innovative (even unexpected) strategies and solutions to pressing justice issues. We’ve found that sometimes an actual tool, such as ROP’s Democracy Grid (image above), can help facilitate a values-based analysis of specific and controversial issues.

Finally, it’s critical that we be ever aware of our target audience and our current political moment. Frames and language resonate differently in different communities at different times. Given the long history of systematic disenfranchisement of immigrants and people of color from our (big “D”) “Democracy” in the United States, we’ve chosen to lead with other values in these communities. Similarly, there may be times when mainstream media or the Right co-opts one of our frames. Then it takes extra work to (re)claim our own meaning and mastery of the frame.

The Starting From Common Values Collection

How one ROP staff organizer describes ROP’s core mission. But even for her, the language of “human dignity” can be awkward.

How can we talk about war in a way that might change the hearts of our “pro-war” neighbors?

Even when we start from presumably shared values, it’s not always clear that we’ll get to the same positions on the issues.

ROP staff organizer, Amanda Aguilar Shank, reflects on ROP’s use of language over time, including during the 2008 Freedom Voters Campaign.

Why ROP chose to make “Democracy” a defining feature of its 2012 STAND election guide and work.

Developed in the mid-1990's, the "Democracy Grid" is one of ROP's cornerstone organizing tools. Using the World Book Encyclopedia's definition of democracy, it supports the analysis of issues from a values framework, asking: does this issue help advance the core tenets of democracy? 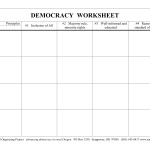 The Democracy Grid: An essay by Marcy Westerling 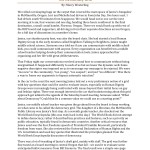 ROP's Democracy Grid is a tool for analyzing issues against the core tenets of Democracy. But how useful is the Grid in communities that have been systematically excluded from our nation's "Democracy"?