When a burning cross shows up on the lawn of one of the few openly queer individuals living in your community, who will stand up to say “Not in Our Town”? When anti-government, anti-tax activists hatch a plan to dismantle and privatize everything from the local post office to the county library, who will defend your county’s basic services and social safety net? When the local paper is flooded with racist letters demanding the immediate deportation of all “illegals” and the sheriff nods in agreement, who will march down main street in support of immigrant justice? When the Aryan Nation decides to set up shop in your small town, who will resist?

It is in rural and small towns where some of our nation’s toughest cultural and political battles play out most intensely, and standing up for justice can be most scary, even dangerous. Community organizing means building the power of people to take collective action to resist injustice and bring about the changes needed to improve their lives and communities. ROP recognizes that we are stronger together than apart, that locally-led groups have a legitimacy in small-town groups that statewide and outside organizations can’t, and that there is safety in numbers. But what does it take to build – and to maintain – a locally-based group that can respond quickly in times of crisis and work over the long haul for systemic change, especially in a rural or small town setting? 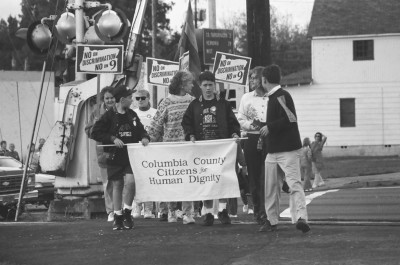 While racism, intolerance and homophobia were nothing new in rural Oregon in 1991, the specific, looming and urgent nature of a credible threat – the Oregon Citizen Alliance’s campaign to amend the Oregon constitution to require discrimination on the basis of sexual orientation – gave Marcy Westerling and other like-minded individuals in Columbia County the impetus to get serious – and better organized – in their resistance.

They knew that it wasn’t enough to have an urban-based (supposedly) statewide group advocating for the issues they cared about – they needed a vocal and visible presence for dignity and democracy in their own town. They formed a group and named themselves Columbia County Citizens for Human Dignity, or CCCHD, for short.

Like CCCHD, most new ROP member groups have formed in response to a specific threat, need or opportunity. 9/11, and the subsequent Patriot Act and wars in Afghanistan and Iraq gave rise to dozens of rural peace groups and Bill of Rights Defense Committees that chose to affiliate with ROP. The Occupy Movement captured the imagination of rural Oregonians, with local Occupations and actions springing up in some 40 different communities. National frustration at the proposed closure of rural Post Offices saw a flood of new folks calling ROP for support to organize in their own towns.

ROP staff and local leaders alike have capitalized on these catalyzing “movement moments” and crises when energy is high and momentum is strong in order to help launch new Human Dignity Groups (or to revive a dormant group).

Soon after the formation of CCCHD, group instigator Marcy Westerling started traveling the state, encouraging and catalyzing the formation of similar groups. The approach she used then isn’t so different from that of ROP organizers today who are trying to help get a local human dignity group get off the ground:

Build for the long term

But there is a difference between a short-term task force or committee that emerges to respond to an immediate crisis or work on a specific campaign and an enduring human dignity group with an ongoing presence. As Marcy Westerling put it, “we were trying to make short-term hysteria have a long-term home.”

ROP staff and local leaders have found that there are some things that organizers can do from the beginning to help an emerging group build a strong foundation for the long-term infrastructure our movements require. One is to define the group’s mission broadly. Articulating the group’s purpose – and its initial campaign or project – in terms of basic values such as “advancing an inclusive democracy” or “upholding human dignity” or “defending justice for all” enables a new group to see a life for itself beyond a single-issue crisis. Likewise, it’s important to support group members in an analysis of how the specific issue they are working to address connects to other issues and to the core values they all share.

While having a core group of leaders is crucial, it isn’t enough. ROP has seen many a group flounder and fizzle because they neglected to build a broad base of supporters. Common ways that emerging groups in the ROP network have done this base-building work is by:

Of course, once you’ve found those supporters, it’s necessary to keep them informed and engaged, with clear opportunities to connect and build relationships with other members of the group and to learn about and take action on issues they care about. That’s where the ROP’s “Organizing Basics” come in.

While the 50+ member groups that make up the Rural Organizing Project vary significantly in size, strength, and focus, ROP has found that the most effective groups share some common characteristics (aka “organizing basics”):

Shoring up these “organizing basics” gives a group the best chance to weather leadership transitions and inevitable lulls in the energy and activity of the group’s membership base.

From 0 to 20 in 9 months. Marcy explains the process by which she helped support and catalyze the formation of 20 rural and small town Human Dignity Groups in the lead up to the 1992 elections which, in Oregon, asked voters to decide whether “homosexuality” should be declared “abnormal and perverse” - and unconstitutional.

Elli Work - It was rather surreal

There’s a reason they call it campaign fever. But what happens after election day? Local human dignity leader, Elli Work recalls what she and other Central Oregon human dignity leaders from the 1992 No on 9 campaign to defeat an anti-gay ballot measure did once the campaign had ended.

After the 1992 No on 9 Campaign to defeat an anti-gay ballot measure, Elli Work and other local leaders were determined to keep working for justice. Here’s what they did next.

Why local-level and locally-led groups are so critical to movements for justice.

Taking Human Dignity Advocates to the next level.

How the Social Justice Alliance built, used and maintained a list of some 500+ supporters.

What does it look like to be on the leadership team of an all-volunteer, local Human Dignity Group? How a handful of committed individuals, each with their own skills, can keep a group active and vibrant.

The capacity, size and formality of Human Dignity Groups can vary greatly over time and from group to group. How much did Social Justice Alliance’s capacity expand over time?

It’s not enough to plan a great event. Organizing requires follow-up and follow-through. Jerry reflects on two missed opportunities he witnessed while living in Tillamook County - and what ROP organizers, had they been involved, might have done differently.

Why sometimes it makes sense to pause in our organizing until there’s a strong enough team to move forward - and what we, as organizers, might do to help get there.

Most human dignity groups are volunteer-run. But for Social Justice Alliance, hiring Dave as a (very) part-time staff was one strategy to ensure the continuity of the group over time.

ROP’s most important work is to keep each Human Dignity Group vibrant, healthy, and growing. ROP supports the formation of new groups and builds the power of existing groups through leadership development, capacity-building, and strategic planning. While the work is ever developing, there are some best practices that have been developed over the years by and for small-town leaders. ROP's Capacity Building Toolkit offers suggestions on starting, nurturing, and structuring a human dignity group. 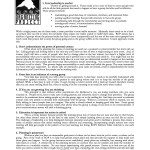