In the early 1990’s, Oregon’s emerging rural and small town Human Dignity Groups found themselves isolated – both geographically and culturally – from one another and from the urban-based, urban-centric No on 9 Campaign to defeat the Oregon Citizen Alliance’s anti-gay, anti-democratic statewide ballot initiative. In-person visits and follow-up correspondence and calls from rural organizing pioneer, Marcy Westerling, provided critical connection to a broader network. In 1993, representatives from some 40 or so of these new HDGs came together at the first Rural Caucus and Strategy Session, and formally established the Rural Organizing Project as a permanent organization for the growing network of Oregon’s rural and small town Human Dignity Groups. 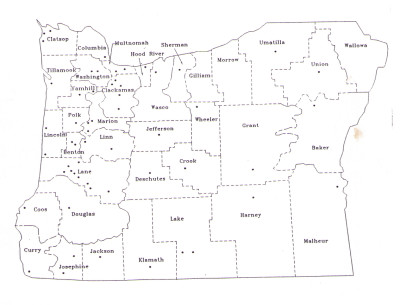 While the social and political landscape of rural Oregon has changed significantly over the past 25 years, the need for a statewide network remains. Today, some 50+ groups across the state turn to ROP for organizing support, political analysis, and links to a greater progressive network.

At the most elementary level, the Rural Organizing Project is a 501c3 non-profit, governed by a Board of Directors made up of rural and small town residents from all regions of the state and elected to the position by local Human Dignity Groups who have paid their $50 annual dues to become an official ROP member group. A humble office in Scappoose, OR, houses a handful of paid ROP organizers. (The number of ROP paid staff members has fluctuated over the years, but never been more than 5 Full Time Employees.) ROP staff’s primary job is to support the leadership of ROP member groups across the state in their work to advance dignity and democracy in their local communities.

How does ROP interact with its “member” groups? What basic values and principles guide ROP’s approach to building rural, progressive power and infrastructure?

Just as a local Human Dignity Group needs some basics in order to flourish, so too does the statewide network. Thus, in addition to providing capacity-building support to individual Human Dignity Groups, ROP also monitors and nurtures the overall health of the network to ensure:

As such, a key part of ROP staff’s job is to create opportunities for local Human Dignity Group leaders and members to: 1) be together in authentic community, 2) learn together for both issue analysis and skill development, and 3) act together for collective impact. These opportunities include:

At its heart, ROP is a movement-building organization, with a long-term vision. The kind of change ROP seeks is a fundamental cultural shift – away from the individualistic, profit-driven, culture of a corporate America founded on white supremacy, patriarchy and heteronormativity towards a vision of beloved community, rooted in a recognition of our interdependence and a respect for every person’s inherent worth and dignity. Cultural change doesn’t happen overnight and it isn’t measured in short-term policy victories or counts at the ballot box.

This kind of deep, systemic change isn’t going to come about because of a single non-profit, no matter how well-funded or staffed that organization is. Rather, it happens because an active, dynamic, social movement is demanding, creating and birthing that new world into existence – unceasing in its resistance of injustice and oppression, and unbounded in its creativity and capacity to build new relationships rooted in a new vision of community.

ROP’s fundamental premise is this: to make the massive social change our country needs, we need hundreds of people in places across the state (we don’t want – and it simply isn’t plausible – to have only urban silos of progressivism) equipped to organize their local communities on all fronts of justice. ROP trusts that, if we build it, it will be used and it will have impact.

Yet ROP also knows that we only grow stronger and build our collective power if we exercise our organizing muscle. While we build for the future, there are also immediate injustices and concrete issues that need to be addressed now. ROP creates opportunities to leverage the power of its local HDG members to have collective impact at a regional or statewide scale on issues that matter. It’s not easy – ROP’s decentralized model, with its emphasis on local group autonomy, can present real challenges when it comes to harnessing and channeling local groups’ energy and capacity towards a common goal. Trying to coordinate statewide action and campaigns on a shoestring budget introduces additional limitations. Most consistently, ROP’s role in statewide policy work has been to engage and mobilize ROP’s base in allied groups’ issue-specific campaigns and actions. As the staff organizer for one allied organization put it, “ROP isn’t just building infrastructure for ROP. ROP is building infrastructure for all of us.”