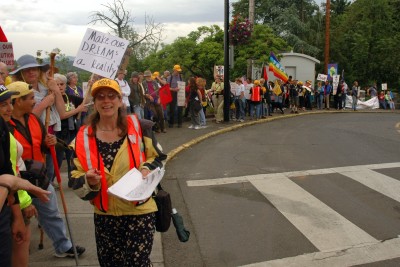 Trish is a local human dignity leader in the Columbia Gorge area. She co-led the Wasco County Citizens for Human Dignity (WCCHD) in The Dalles, OR from 2002-2007 and served as the ROP point person to the Columbia River Fellowship for Peace (CRFP) in Hood River from 2009-2012. Trish also served as a Rural Organizing Project board member from 2006-2008.

Interview Summary: In her interview for the project, Trish recalls formative social justice experiences growing up, the influence of her family, and her earliest organizing work (she started a “Kids Have Rights, Too” club in 4th grade!). She discusses the reasons behind her decision to pursue a career in the allied health practices field and to move out West to Oregon in the mid-80s. She describes finding a new sense of self-worth through her involvement with Wasco County Citizens for Human Dignity (WCCHD), after coming out of a difficult relationship. Trish also talks about WCCHD’s organizing in response to the Iraq and Afghanistan wars, for the 2004 elections, and around immigrant justice.

Also covered in the interview are Trish’s experiences with Columbia River Fellowship for Peace and on the ROP Board of Directors, her participation in ROP’s Walk for Truth, Justice and Community, and the challenges of transitioning leadership in Human Dignity Groups. Trish also reflects on what she learned in her role as union president with the Oregon Educators Association (OEA) and organizing a major civilian conference on drones in 2010.

Trish Leighton – I became the navigator