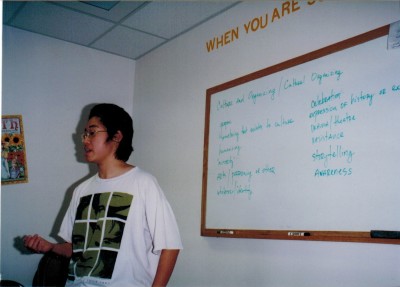 Rachel Ebora worked as ROP’s part-time Administrative Assistant for several years in the late 1990s. She was the first person of color and immigrant on ROP’s staff.

Interview Summary:  In this interview, Rachel reflects on her experience and changing identity as a young, queer Filipino immigrant, arriving in Oregon with her parents as a teenager in 1987, just as the Oregon Citizens Alliance was activating its anti-gay agenda. She touches on some of her early experiences with activism (and the potential for burnout), working as an organizer with groups such as the Oregon Sexual Minority Youth Network, Cascade AIDS project, the Hotel Workers Organizing Committee and H.E.R.E. Local 9. She talks about her involvement with Portland Taiko and her work (post-ROP) with Oregon Action and several non-profit and community groups in California, including Bernal Heights Neighborhood Center, where she currently serves as Executive Director.

Rachel also provides entertaining descriptions of the first ROP office and her interactions with ROP founder, Marcy Westerling. She describes ROP’s systems and the day-to-day administrative work that was her primary responsibility at ROP, but also reflects on the broader aspects and nature of ROP’s work, including: Marcy and ROP’s approach to organizing, the relationship between ROP and local Human Dignity Groups, ROP’s philosophy on the use and management of resources, racism and racial dynamics within ROP and its member groups, and the ways that her time at ROP influenced and impacted her.

Rachel Ebora – ROP was my school

ROP is a community where leaders are invited to bring their whole selves. What are all the components of being an authentically queer, immigrant, person of color activist?