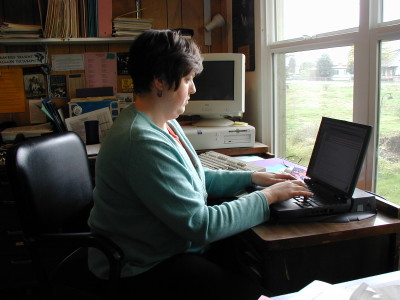 Kelley’s first connection with ROP came in the early ‘90s through campaigns to defeat the Oregon Citizen Alliance’s homophobic Ballot Measure #9 and subsequent “Son of 9” local measures. At the time, she was office manager for Community Alliance of Lane County (which eventually joined ROP as an affiliate group). Kelley was hired to work at ROP in 1995 and, in 1988, transitioned from her position as ROP’s Field Network Coordinator to a new role as ROP’s Co-Director, alongside Marcy Westerling.

Interview Summary: In Session #1, Kelley talks about growing up in a working-class Portland neighborhood in the 1970s and her decision to leave a private Catholic school to attend Madison, then the most diverse high school in the city – an experience which informed her understanding of race in new ways. She discusses her activism around nuclear disarmament as a college student at the University of Oregon and the choices she faced and made after graduation. She describes getting hired in 1990 for her first social justice job, as office manager for Community Alliance of Lane County, just weeks before the Gulf war broke out and recalls memories from the 1992 March for Love and Justice, which she joined as a CALC delegate.

The interview then moves to Kelley’s first experiences as an ROP staff person: her first assignment, her impressions of ROP founder Marcy Westerling, and their transition to a co-directorship. She reflects on the importance of having centralized staff in an otherwise decentralized model, and describes ROP’s experiment with decentralized staff through the LOUR (Latinos and Others United in Response) project. She also touches on ROP’s early anti-racist work, the strategies staff used to support local Human Dignity Groups in embracing a multi-issue approach, and the roles of ROP staff vs. local, volunteer leaders.

Session #2 digs deeper into the programmatic work that Kelley took on while at ROP. She talks about ROP’s decision to take on economics-focused work in the mid-1990s and the larger Action Education program of which it was part. Other topics include: what the fall of the OCA meant for ROP’s organizing, ROP’s “Democracy Grid” and how it was used, ROP’s approach to electoral work, and a series of four anti-racism workshops conducted with local human dignity groups` in the mid-90s. Finally, Kelley reflects on some of ROP’s internal and organizational dynamics, such as decision-making processes, the ROP board structure, and the relationship between ROP staff and local leaders.

Even when we start from presumably shared values, it’s not always clear that we’ll get to the same positions on the issues.