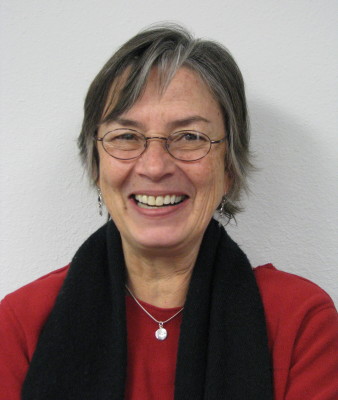 Kathy Paterno is a core leader of Crook County’s Human Dignity Advocates (HDA). She also served on the ROP board from 2008 to 2015, including several years as ROP Board Chair.

Interview Summary: Kathy recounts her childhood growing up in a working-class family in a small-town, blue-collar area of New York. Raised to trust and believe that “the people in charge know what they are doing,” Kathy traces her journey westward from New York to Prineville, Oregon, where she began to question that belief and eventually, together with her husband, Phil Paterno, become deeply engaged in political activism. Kathy describes the origins of Crook County’s Human Dignity Advocates and the role ROP staff played supporting her and the group over time.

Kathy also talks in depth about her involvement with several HDA/ROP campaigns and actions: hosting a 2006 Living Room Conversation, helping organize the 2007 Cost of War Town Hall, getting arrested during a subsequent sit-in at Senator Greg Walden’s office, leading HDA’s civic engagement work for the 2008 elections as part of ROP’s “Super Seven” Freedom Voters Campaign, interviewing community leaders for a 2009 Economic “Listening Project” and hosting a follow-up Community Roundtable, attending a 2009 Health Care Townhall with Sen. Merkley in Bend, and being in charge of HDA’s monthly Potluck Politics gatherings.

Kathy Paterno – Better than me

What Kathy learned (and did differently) when her working class family moved to a new town when she was in 7th grade.

Kathy Paterno – The people in charge know what they are doing

For nearly all her life, Kathy had trusted and believed that those in power knew what they were doing. Then, suddenly, something shifted.

Kathy Paterno – When it hit me

A critical moment of politicization (and the dinner conversations that set the stage).

Who was behind and who was out front in the 2006 arrest of 7 grandmothers that staged a sit-in at US Senator Greg Walden’s office?