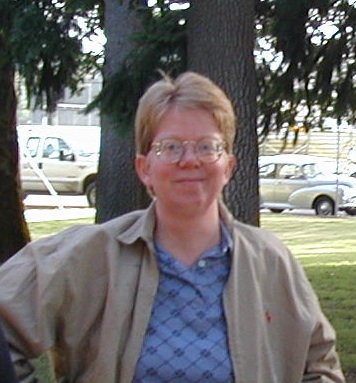 In 1994, Janice founded the McMinnville­-based human dignity group, Neighbors Talking to Neighbors, to organize Yamhill county residents in opposition to the anti­-gay Ballot Measure 13. Janice joined the ROP Board of Directors in the Spring of 1995, and served as Board Chair from June 1995 through January 1998.

Interview Summary: In this interview, Janice describes the political and social landscape of her home state of Minnesota, family influences, her early decisions around schooling, and her first experiences with rural organizing while working in “outstate” Minnesota at a state energy agency (which included working alongside the late US Senator Paul Wellstone before he became Senator). She discusses coming out as a lesbian in her early 20s, and her decision to move to Oregon in the early 1990s.

Janice shares why and how she started Neighbors Talking to Neighbors (a McMinnville­-based human dignity group), NTTN’s various activities, and the early support she found from Marcy/ROP. Remembering her time on the ROP Board, Janice recalls helping to set up ROP’s basic organizational systems, structures, policies and a board meeting format that included an educational component and learning from host human dignity groups. She talks in detail about the reasons for and process of developing ROP’s “Democracy Grid,” and touches on ROP’s 1995 “Enough is Enough” civic engagement campaign ­ both of which, she viewed as being an important element in ROP’s switch to a more proactive vs. reactive stance. Janice describes her decision to move to Portland and taking a job with the Oregon Working Group for Campaign Finance Reform, even though a Portland address meant leaving the ROP board. She discusses her continued involvement with ROP as part of that new job and reflects on what she learned through (and how her later steps were influenced by) her experience with ROP.

Janice Thompson – Why we needed the Democracy Grid

How a simple, one-page tool helped ROP live in to its identity as a multi-issue organization.

How ROP Board Member Janice Thopmson’s school teacher sensibilities proved so useful in coming up with one of ROP’s signature organizing tools.

ROP’s Democracy Grid is a tool for analyzing issues against the core tenets of Democracy. But how useful is the Grid in communities that have been systematically excluded from our nation’s “Democracy”?