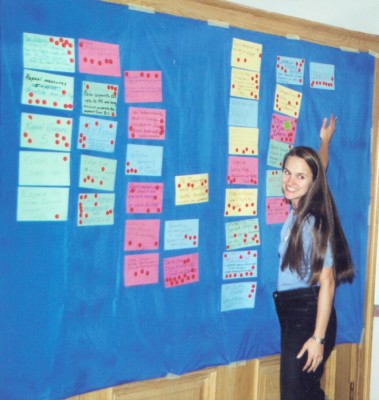 Interview Summary: In the first part of this interview, Grace reflects on the early moments in her journey to social justice work (from growing up in a racially integrated neighborhood in Denver, Colorado, to worrying about the prospect of nuclear war as a kid, to seeing inequality during a family vacation in Mexico, and questioning what it means to be American after a trip with her dad to Hiroshima) and how these experiences compelled her to learn more about peace and international affairs. She describes the pivotal role in her political development of time spent in South Africa and Mozambique, and some of her early social justice-related jobs before she was hired at ROP.

The rest of the interview covers Grace’s time at ROP: the work that she did supporting ROP member groups around civil liberties the wake of 9/11, organizing local human dignity groups to come to Salem for the 2003 Ruckus for Justice, and leading the Action Education program. Grace also reflects on some of the challenges she encountered as an ROP organizer, as well as various strengths and tensions associated with ROP’s organizing model.

How a ROP staff organizer describes ROP’s core mission. But even for her, the language of “human dignity” can be awkward.