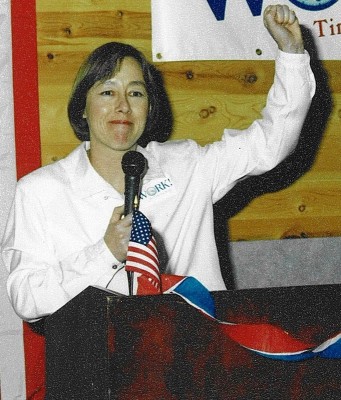 Interview Summary: Elli starts off discussing some of the pivotal experiences from her youth that cemented her commitment to justice, including learning about the Soweto massacre in South Africa and about her own family’s role in WWII. She describes moving to Oregon after serving three years in the US Army and setting up her small blueprinting shop in Bend, where she began to volunteer at the local NOW office. She recalls various anecdotes from her involvement in the Central Oregon No on 9 committee, which worked to defeat the Oregon Citizen Alliance’s anti-gay Ballot Measure 9 during the 1992 elections – and she talks about how members of the Committee continued to work to advance diversity and human dignity through the formation of the Deschutes County Coalition for Human Dignity.

Elli shares her experience of coming out publicly in uniform in 1993 and the National Guard’s subsequent fact-finding investigation, as well as reflections on her ultimately unsuccessful run for a seat in the Oregon House in the late 90s. She tells the story of a campaign that she spearheaded in 2000 to get the Bend Chamber of Commerce to fly a Mexican flag alongside its Canadian and US flags. The interview also includes Elli’s thoughts on her leadership style (particularly in her work as DCCHD’s Executive Director) and on the role that ROP, and its founder Marcy Westerling, played in her own development as a political figure and human dignity activist. She also explains her decision to move to Portland in the early 2000s.

Elli Work – It was rather surreal

There’s a reason they call it campaign fever. But what happens after election day? Local human dignity leader, Elli Work recalls what she and other Central Oregon human dignity leaders from the 1992 No on 9 campaign to defeat an anti-gay ballot measure did once the campaign had ended.

After the 1992 No on 9 Campaign to defeat an anti-gay ballot measure, Elli Work and other local leaders were determined to keep working for justice. Here’s what they did next.

Throughout the 1990s, Elli Work served as Executive Director for Deschutes County Coalition for Human Dignity, an ROP member group. In this clip, Elli recalls a call she made to ROP director, Marcy Westerling, during a particularly difficult moment.