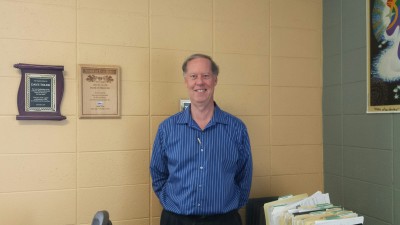 Dave was one of founders and leaders of the Illinois Valley Human Rights Alliance, a Human Dignity Group from Josephine County’s Illinois Valley area that formed in the early 90s, and was later renamed Social Justice Alliance and expanded its reach to the whole county. Dave worked as a part-time staff of SJA from 2000-2005.

Interview Summary: In Session #1, Dave talks about the emergence of the Illinois Valley Human Rights Alliance in the early 1990s and some of its first activities resisting white supremacy. The majority of the interview focuses on Dave’s trajectory as a public elected official, first, as a school board member and later as a County Commissioner from 2007-2011. He describes in depth the challenges he faced as a progressive Commissioner in a county where politics are largely controlled by right wing and Christian activists. He talks about his motives for moving on and the connection between ROP and SJA.

In Session #2, Dave covers aspects of his early life, pre-Oregon: frequent moves across the South as the child of an army officer, grasping the concept of “non-discrimination” through the army, learning about racism as a teenager in Atlanta, and experiencing the liberal culture of Norway.  He discusses his developing political sensibility through college and his decision, after college, to come to Oregon where he got his first job as a canvasser for Oregon FairShare. Dave describes life with his former partner and two kids in Southern Oregon, and his first forays into organizing in the Illinois Valley.

Dave describes the political landscape of Josephine County and the role of the Social Justice Alliance (SJA, formerly IVHRA) in maintaining a progressive presence. He reflects on SJA’s goals, focus, activities, capacity and inner-workings, as well as his role as the group’s part-time staff person. Finally, Dave shares his thoughts on the relationship between ROP and SJA.

Dave Toler – What people power can do

In 1996 Illinois Valley residents came together in an unprecedented campaign to stop a prison from being built in their community. Here campaign leader Dave Toler recounts the story of unlikely allies coming together to turn the tide.

How the Social Justice Alliance built, used and maintained a list of some 500+ supporters.

The capacity, size and formality of Human Dignity Groups can vary greatly over time and from group to group. How much did Social Justice Alliance’s capacity expand over time?

Most human dignity groups are volunteer-run. But for Social Justice Alliance, hiring Dave as a (very) part-time staff was one strategy to ensure the continuity of the group over time.