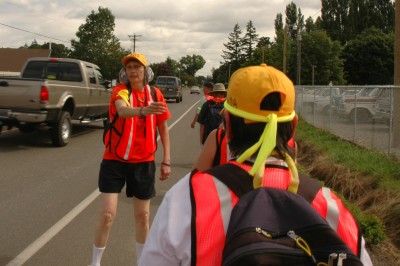 Dancer’s years of hard work in Douglas County advocating for the poor and unhoused prior to the Occupy movement has paved the way for Occupy Roseburg to hold so much space in their community, including an ongoing Feed the ‘Burg potluck that serves between 60 and 125 hungry folks every week for almost 250 consecutive weeks. In 2005, Dancer joined ROP for our famous Walk for Truth, Justice, and Dignity, and hit the road again in 2013 with the March for ONE Oregon Bus Tour through central and eastern Oregon for just immigration reform. In 2016, Dancer joined a contingent of rural Oregonians traveling to Standing Rock. Growing up in Oklahoma, Dancer has always lived rural, poor and queer. Early on she connected the dots between class, race and gender. Dancer brought this dynamic clarity and commitment when she served on the ROP Board (and her job as grandma).”

Dancer Davis – Being out in rural Oregon

Being “out” in rural Oregon: Dancer Davis describes the reception that she and her partner, Jeri, received upon moving to Bridge, Oregon in 2000.