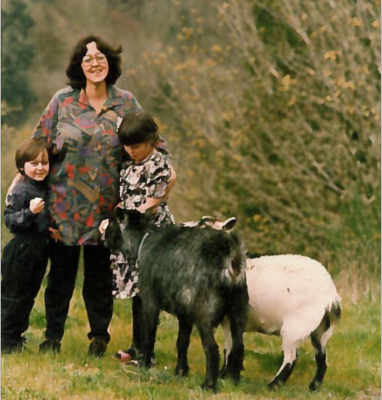 Cris Lira first connected with ROP in 2000 when she applied for and was accepted onto the ROP Board of Directors. While serving on the board (and eventually as board chair), she also served as a ROP liaison to ROP member-group, Sexual Assault Support Services of Lane County (SASS), where she worked as Co-Director with Maria Paladino.

Interview Summary: In this interview, Cris traces her trajectory from a childhood in Texas and southern California marked by life in a large, extended family and culturally diverse neighborhoods, to her identity  struggles as a Latina teenager in a predominately white Los Angeles suburb. She reflects on the role of her family members and the YMCA in exposing her to politics, the significance of a college sorority in her process of coming out as queer at school (though not yet at home with her family), and the subsequent ostracization she experienced by the Christian Fellowship group she had been involved with since high school. She describes the factors that led to her decision to become a mom and move to Oregon.

Cris provides rich accounts of her life as a stay-home mom in rural Elkton, Oregon in the 1980s and how things changed for her when she moved to and took a job in Cottage Grove. She explains how she went from an apathetic, non-voter to a progressive organizer and human dignity leader during her tenure at SASS. Cris talks about her experience as ROP board chair, as a participant on the 2005 Walk for Truth, Justice and Community and at ROP’s annual Rural Caucus. Finally, she summarizes the profound turns her life took because of ROP.

Cris Lira – I was bringing it back

Back and forth, back and forth: how attending ROP’s annual Rural Caucus & Strategy Session helped fuel the immigrant justice work of Lane County human dignity activists at Sexual Assault Support Services.

Cris Lira – Being in the limelight

It’s not always easy for ROP staff to strike the right balance between encouraging people to step up in their leadership roles and providing appropriate support for people to do so, especially when staff are juggling so many responsibilities (such as coordinating a 7-day, 50-mile Walk with hundreds of participants!). Former ROP Board Chair, Cris Lira, reflects on her readiness (or lack thereof) to serve as ROP’s Board Chair, and shares a painful experience from ROP’s week-long Walk for Truth, Justice and Community in 2005.

Cris Lira – I learned that change can happen

Why rural organizing is so critical.