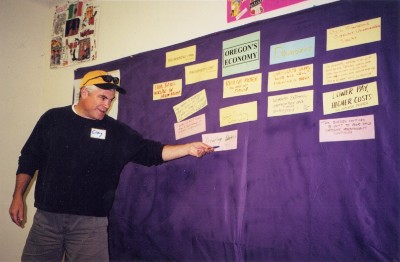 Craig has been an active member and leader of Columbia County Citizens for Human Dignity since 2001. Craig served as CCCHD chairperson for a year, and on the board for about 6 years after that.

Interview Summary: In this interview for the Rural Organizing Voices project, Craig reflects on the historical events and personal experiences that shaped his worldview and interest in politics.  He describes growing up in politically conservative Ontario (Oregon) and his first campaign – an (unsuccessful) bid for student body vice-president – before leaving Ontario to attend the University of Oregon. He traces his journey post-graduation, finding work as a high school social studies teacher, becoming a leader in his union, and working or volunteering on numerous electoral campaigns, in various locations across the state, before moving moving to Columbia County in 1998.

In the second half of the interview, Craig recounts his work as a leader of Columbia County Citizens for Human Dignity. He describes the group’s successful, grassroots campaign to defeat a local anti-choice, parental notification ballot measure in 2003. Craig also talks at length about CCCHD’s campaign several years later to defeat two county-wide anti-immigrant ballot measures – an intense campaign which they lost in the election, but ultimately won via the courts. And he reflects on the aftermath and impacts of that campaign for himself, personally, and for CCCHD as a whole.

In the mid-90s, progressive infrastructure in rural Oregon was weak to non-existent. Local human dignity leaders like Craig Frasier have played a key role in changing that.

Craig recalls the most successful campaign he’s ever worked on (and he’s worked on a lot!). How Columbia County Citizens for Human Dignity defeated a county-wide, anti-choice, parental notification ballot measure.