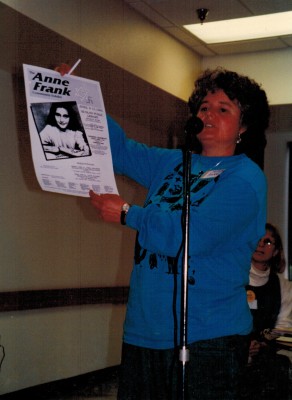 Cathy Barr, a 30-year resident of Deadwood, OR, was active in the early 90s with the Florence-based, Siuslaw Peace Force, a ROP member group that also took a public stance in opposition to the Iraq war.

Interview Summary: Cathy recalls experiences she had growing up in an upper middle class Jewish family from a Philadelphia suburb that helped her develop empathy. She explains her educational background and how her involvement in a rural health project in North Carolina led to her love of the country. She discusses her work as a social worker, her political involvement as a feminist, her volunteer commitment as founder of the feminist non-profit Hurricane Productions cultural productions company, and the personal transformations she experienced while living in Milwaukee, WI in the 1970s – and why she and her partner made the decision to move to Deadwood, OR in the fall of 1983.

The interview also covers Cathy’s life and activism in Deadwood, including her engagement with the local Community Center (a.k.a The Deadwood Fire Hall), the food co-op, a woman’s’ sharing group, and a care team that works to help meet individuals’ basic caregiving needs. Cathy discusses the Siuslaw Peace Force (an ROP member group) and its collaboration with ROP on projects such as the Anne Frank Exhibit and the Floyd Cochran tour. Finally, Cathy describes how rural life in Deadwood has changed over 30 year – and the economic survival strategies that she and her partner and their fellow community members employ in order to stay living in a community with such a dwindling economy.