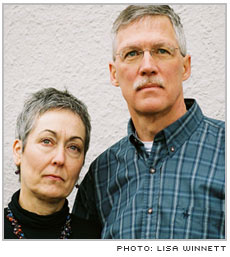 Linda and Brian Stahl are long-time human dignity leaders from The Dalles, Oregon. They founded the Safe Schools Task Force and have been active member-leaders of both Wasco County Citizens for Human Dignity (WCCHD) and the Mid-Columbia PFLAG chapter.

Interview Summary: In their interview for the project, Brian & Linda discuss early life influences around social justice issues. They speak candidly about how, in the mid-90s, their older son came out to them as gay – a pivotal moment in their lives as parents and a catalyst for action. They also describe in detail their subsequent efforts to advance human dignity: starting the Safe Schools Task Force, getting involved in their local PFLAG chapter, producing the Mid-Columbia LGBT Health Resource Directory (a joint project of Mid-Columbia PFLAG and WCCHD), and helping to start a Gay Straight Alliance at the local high school.

Brian and Linda also reflect on their involvement with the Rural Organizing Project and the ROP member-group, Wasco County Citizens for Human Dignity. They recall ROP’s support when working with other WCCHD members in the early 90’s (even before their son came out) to fight the Oregon Citizen Alliance’s anti-gay ballot measures, and when planning events in The Dalles as part of the No on 36 campaign (the unsuccessful campaign to defeat a statewide ballot measure that amended the state constitution to define marriage as a union between one woman and one man). They also share the story of how Wasco County became the only county in Eastern Oregon to pass a non-discrimination ordinance before the statewide measure passed, and the critical role that ROP staff played in supporting them and the other local leaders of that effort.

Linda Stahl – My letter to the editor

In 2000, the Oregon Citizens Alliance sponsored the anti-gay Ballot Measure 9: “Prohibits Public School Instruction Encouraging, Promoting, Sanctioning Homosexual, Bisexual Behaviors.” Local human dignity leader (and parent of a gay son), Linda Stahl, was fed up.  Here she tells the story of what she did next – and her neighbors’ surprising reactions.

Recognizing and respecting local knowledge and expertise is a fundamental premise behind ROP’s approach to supporting rural and small town human dignity leaders. Here, Brian and Linda share the story of how ROP staff organizer, Amy Dudley, supported them in their work to pass a county-wide non-discrimination ordinance.