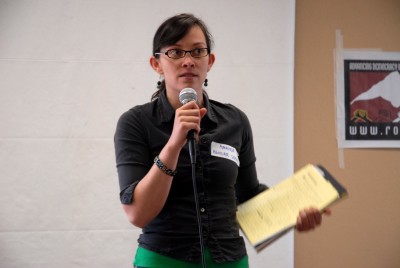 Amanda Aguilar Shank was hired as an ROP Field Organizer in 2008.  In the fall of 2013 she joined the ROP Leadership Team as Associate Director. During her time on ROP staff, Amanda organized the first ROP Latino Leadership Retreat, spearheaded the formation of ROP’s Latino Advisory Board (LAB), and oversaw ROP’s Welcoming Communities campaign.

Interview Summary: In Session #1, Amanda describes her family background and the influence of her parents’ political leanings and participation on her own worldview. She recalls her parents starting a Beyond War chapter and hosting meetings in their home, and witnessing her family members experience discrimination as immigrants and people of color.  She reflects on the powerlessness she felt as a teenager in boarding school, and the process of regaining her sense of power once she got out. Amanda also recounts her first experiences with social justice organizing during her college years and shortly after, including: going on a service trip/delegation to Nicaragua, helping to start the Reed College Latino Student Union, volunteering with VOZ Workers Rights Education Project, working with PCASC (Portland Central America Solidarity Committee), traveling to her mom’s native El Salvador and meeting her family there for the first time, and working as a union organizer at SEIU.

The second half of the session centers on Amanda’s experiences as a newly hired staff organizer at ROP. After describing new staff orientation (and what she was learning about ROP’s organizational culture through it) and some of her first road trips with ROP, Amanda spends the rest of the interview reflecting on one of her first projects as a new organizer – ROP’s 2008 Freedom Voters campaign.

Session #2 covers Amanda’s involvement in the 2008 campaign to help defeat two anti-immigrant county-wide ballot initiatives in Columbia County and her role in supporting Columbia County’s local Latino community in forming their own human dignity group, Latinos Unidos por un Futuro Mejor and organizing a first-of-its-kind, public Procession for Respect and Dignity. She also describes the history and evolution of ROP’s work on and commitment to racial justice, the development of LAB, ROP’s Latino Advisory Board, and the challenges and progress being made in ROP’s ongoing transition towards becoming a more multi-cultural, multi-racial organization.

Session #3 focuses on ROP’s approach to political education. Amanda shares several examples of Living Room Conversations that she facilitated and reflects on their impact. She also discusses other methods or formats that ROP uses for building members’ political analysis: Kitchen Table Conversations, the Democracy Grid, the annual Rural Caucus & Strategy Session, toolkits and tours, such as the 2010 Out in the Silence Tour. The interview concludes with Amanda’s reflections on ROP’s theory of change and it’s “lean and mean” organizational model.

ROP staff organizer, Amanda Aguilar Shank, reflects on ROP’s use of language over time, including during the 2008 Freedom Voters Campaign.

ROP staff organizer, Amanda Aguilar Shank, breaks it down: what is the LRC, in what contexts is it useful, and what can it achieve?

A Living Room Conversation around the theme of creating more welcoming communities goes in an unanticipated, but not unproductive, direction.