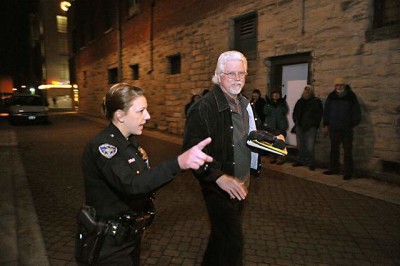 Allen Hallmark is a founder of the Medford-based Human Dignity Group, Citizens for Peace and Justice (CPJ). He served as CPJ’s treasurer and “defacto PR man” for many years. Allen has also been very active in the local Occupy Medford group.

Interview Summary: Allen discusses his family background, early political influences, and the various options and decisions he made regarding educational and career choices (including going to law school and hating it!). He shares his reasons for deciding to enlist in the Army and anecdotes about his time serving in Vietnam. Allen also touches on the Army’s reaction when he declared himself a Conscientious Objector, and his involvement with GIs United Against the War, the “Bragg Briefs” newspaper and, later, the Norris Community Club, a civil rights group in Commerce, Texas. He describes the life and career choices that eventually brought him to Oregon. Allen talks about the founding of Citizens for Peace and Justice and its initial activities, as well as the group’s goals, structure, leadership and relationship with ROP. He also tells the story of when he and several other Southern Oregon activists occupied Senator Greg Walden’s office during the height of the Occupy Movement.

You don’t need to be an expert to take action. Sometimes just showing up can have a big impact.

What does it take to start a small town human dignity group? Here Allen shares how Citizens for Peace and Justice got its feet off the ground.

What does it look like to be on the leadership team of an all-volunteer, local Human Dignity Group? How a handful of committed individuals, each with their own skills, can keep a group active and vibrant.

Allen Hallmark – How the Occupy Walden action went down

What were the “Medford 6” thinking (and doing!) behind the scenes on December 5th, 2011 – the day they got arrested for Occupying the offices of Rep. Greg Walden to demand accountability and justice for the 99%?