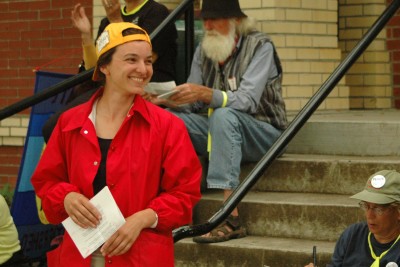 Aeryca served as the Director of CAUSA, Oregon’s statewide immigrant rights coalition and one of ROP’s most important allied organizations, from 2005 – 2008.  Aeryca was also one of three core coordinators of the joint ROP-CAUSA-BRO (Basic Rights Oregon) campaign in 2008 to defeat two anti-immigrant ballot measures in Oregon’s Columbia County.

Interview Summary:  Aeryca describes her path from Vermont to Oregon to intern with PCUN, Oregon’s farmworker union and eventually work with CAUSA.  She recalls her experiences on ROP’s 2005 Walk for Truth, Justice & Community and attending one of ROP’s immigration Living Room Conversations. Aercya discusses in depth the 2008 campaign to defeat two anti-immigrant ballot measures in Columbia County, touching on the team dynamic and her own role in it, challenging decisions around messaging, and her analysis of ROP’s strengths, weaknesses and unique contributions in the campaign. She also reflects on ROP’s organizational culture, ROP’s role in the broader movement for social justice in Oregon, and the relationship between ROP and PCUN/CAUSA.

Aeryca Steinbauer – Coming out for justice on The Walk

ROP ally, Aeryca Steinbauer, was breaking new ground both personally and politically with a speech she gave as part of The Walk for Truth, Justice and Community in 2005.