How a crisis moment (and some very passionate organizers) spawned an enduring rural movement for human dignity in rural and small town Oregon. In this audio slideshow, Rural Organizing Project (ROP) founder and Executive Director (1993-2011) Marcy Westerling, tells the story of how ROP came to be. 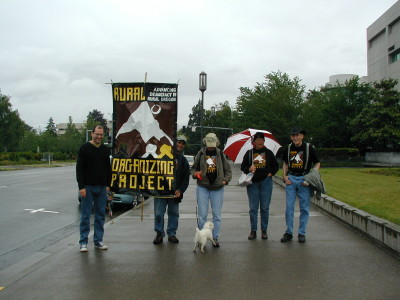 The Rural Organizing Project (ROP) is a statewide organization of locally-based groups that work to create communities accountable to a standard of human dignity: the belief in the equal worth of all people, the need for equal access to justice and the right to self-determination. Starting in 1992, ROP’s challenges to the anti-democratic right have earned ROP a national reputation for being an effective grassroots organization that takes on the hard issues.

The catalyst for ROP was the Oregon Citizens Alliance’s outrageous Abnormal Behaviors Initiative, which targeted gay and lesbian Oregonians for legalized second-class citizenship. Oregonians in small towns across the state were mobilized, many for the first time, as basic tenets of the Constitution were at risk through this 1992 ballot initiative. ROP stepped into this organizing opportunity to fill a niche the radical right was trying to claim. Today, ROP works with 50 member “Human Dignity Groups” to organize on issues that impact human dignity and to advance inclusive democracy. ROP’s mission is to strengthen the skills, resources, and vision of primary leadership in local autonomous human dignity groups with a goal of keeping such groups a vibrant source for a just democracy.

Putting it all in context: a series of interactive timelines explore the history of ROP and grassroots organizing in rural and small town Oregon over the past 20 years.  More »

Putting you there: multi-media essays tell the story of standout actions and campaigns from ROP’s history.  More »

Digging Deeper: A collection of essays and articles that explore ROP’s history in-depth: 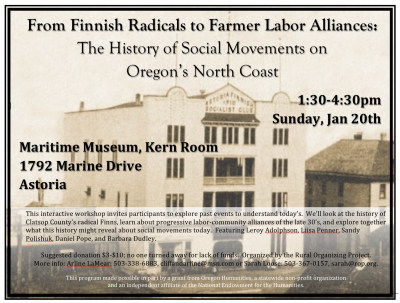 Of course, the history of progressive, grassroots organizing and social movement activity in rural Oregon didn’t start with the emergence of ROP. In 2012, Rural Organizing Voices coordinator, Sarah K. Loose, in partnership with ROP and with the support of Oregon Humanities, created History From Below. A “participatory, traveling history workshop,” the History From Below tour invited rural and small town Oregonians to explore the long history of social movement activity in their own region and consider the connections between grassroots movements past and present.  More »