From 0 to 20 in 9 months. Marcy explains the process by which she helped support and catalyze the formation of 20 rural and small town Human Dignity Groups in the lead up to the 1992 elections which, in Oregon, asked voters to decide whether “homosexuality” should be declared “abnormal and perverse” – and unconstitutional. 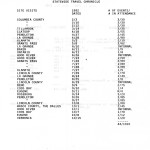 County-by-County organizing as a “bullshit detector” – we’ve got to be able to find people who care about our message in every single county. Otherwise, what the #%?@ are we doing?

How does a group keep momentum after a crisis moment has passed? In the aftermath of intense campaigns to defeat the anti-gay Ballot Measure #9 (1992) and a subsequent rash of similar, county and city-wide initiatives (1993-94), a touring holocaust exhibit not only mobilizes and strengthens local human dignity groups–it helps prepare them for the next crisis.

ROP founder, Marcy Westerling, traces ROP’s style of political education back to her own education through the feminist movement and Oregon’s network of anti-violence advocates.

Why sometimes it makes sense to pause in our organizing until there’s a strong enough team to move forward – and what we, as organizers, might do to help get there.

As organizers, we need to be in touch with our own struggles and process of learning and use those a bridge to support others in dealing with their own racism, sexism, classism and homophobia.